Set in the midst of Berlin’s vibrant city center yet tucked away in a calm corner of the historical Bebelplatz; the capital’s former Dresdner Bank now accommodates a magnificent hotel by the name of Hotel de Rome. This winter – which now seems like ages ago – I had the pleasure of checking in for a night. In this post, I’m inviting you to join me for an evening in one of the finest luxury hotels of Berlin.

A hotel with a grand history

It’s a tale of national treasure and a grandiose past, which allures you the minute you step inside the 125-year-old building in Berlin’s Mitte district. This place is tightly bound up with the history of the German capital, which is also why a stay here is more than checking in to a high end hotel. You basically feel like being transported back to the 19th century when Dresdner Bank had their headquarters here. After World War II, the building was used to house the state bank of the GDR – also the time when the area became the Soviet sector.

Many of the original details are preserved to this day. As the building was thoroughly renovated in 2003, great efforts were made to preserve the original interior. The current spa area of Hotel de Rome is, for example, located in the former jewelry vault, and where the suites are now to be found, the bank director’s offices were once proudly welcoming staff members and guests. “If only these walls could speak!”, I found myself thinking many times during my stay.

Hotel de Rome is part of the Rocco Forte family who now operates 14 luxury hotels worldwide. It opened its doors in 2006, and even though it would be obvious, the hotel has no references to Rome as such. In fact, Hotel de Rome reflects the city of Berlin in the most authentic way possible. The building itself is one of the few remaining historical buildings in Berlin, and the contemporary yet classic interior design embodies the spirit of the capital in the most elegant way.

Based on this – and the fact that Rocco Forte is one of my absolute favorite hotel chains (I’ve stayed in several of their properties and loved it every single time!) – it’s fair to say that I had my share of expectations for an overnight stay.

A calm refuge in the heart of the Berlin

Upon the cordial greeting of the concierge, I checked in and made my way through the ceilinged lobby towards the elevator, which took me to the 2nd floor. Further on, through the impressive hallways with original stone floors and mahogany doors. The door to my room was shaped as a vault, and when opening it, I was met by a lovely 45 m2 Junior Suite. The interior design is, in my opinion, typical Italian; earthy tones with dashes of bright colors here and there, thick curtains, designer lamps, soft hues – and of course a spacious bathroom with a tub, complimentary Irene Forte toiletries and a Nespresso machine to seal the deal. No balcony, but large windows with a view to the neighboring St. Hedwigs Cathedral. Despite the hotel’s very central location, I’d never before been in such calm and quiet surroundings in Berlin. And the minute I left the following day, I already longed to go back. It dawned on me that this hotel is almost like a refuge in a city that really never sleeps. Oh, and don’t even get me started on the King-sized bed, which I probably loved a little bit more because I was a tired mother longing for a good nigh’t sleep. That’s exactly what I got here. Hotel de Rome offers 108 rooms and 37 suites.

Before taking you to the restaurant, let me briefly introduce you to what is one of Berlin’s best rooftop terraces. Unfortunately, it was too cold to sit outside during my stay, but I’d experienced an enchanting summer evening here a few years earlier, and had been wanting to return ever since. Not many words are needed, just make sure to pass by next time you’re in town to watch the sky fade from blue to pink while you’re sipping a glass of champagne. It’s the ultimate summer experience! If you’re more of a tea drinker or coffee lover, book a table in the hotel’s Opera Court, which is said to serve the finest Afternoon Tea in Berlin. Why don’t you go find out yourself?

La Banca is the name of the restaurant; here, guests are treated to Italian classics with a modern (Berlin) twist. Michelin-starred chef Fulvio Pierangelini works his magic in the kitchen, and I was pleasantly surprised with an array of different starters before enjoying two hearty pasta- and meat dishes. Naturally, plenty of olives, crusty bread and liquid gold in the shape of cold-pressed olive oil from Sicily made its way to the table as well. In summer, it’s possible to dine in the La Banca garden.
The breakfast buffet, which I’m genuinely excited about every time I stay in a hotel, was good, but not the highlight of my stay. Great fresh fruit selection, but with a few missing links. Nevertheless, I felt at home and comfortable in the stylish yet laid-back surroundings.
If you fancy a drink either before of after dinner, pay a visit to the hotel’s cocktail bar La Banca, where signature cocktails are prepared with homemade infusions.

You can’t write about Hotel de Rome without mentioning its spa, which in many ways, is the heart of the hotel. The mere fact that the spa- and wellness department is located in the former bank’s jewelry vault adds another layer of mystery and luxury to the whole experience. Grab one of the pool lounge chairs if you can (I’d recommend coming early in the day, as it can fill up quickly), or simply indulge in the soothing spa experiences and treatments. After an hour in this space, I simply felt reborn.
The products used in the spa are from Irene Forte – the daughter of Rocco Forte – and the Organic Pharmacy.

I wrapped up my stay at Hotel de Rome with half an hour in the lobby before departure. By simply sitting and taking in the atmosphere, you’ll truly get to know the spirit of a grand luxury hotel that, in my opinion, embodies the past with the present in the most wonderful way. Classy but never boring. Vibrant but never too much. Welcome to Hotel de Rome. Make sure to book your stay here directly through their website.

I was invited by Hotel de Rome, but views and opinions are – as always – my own. 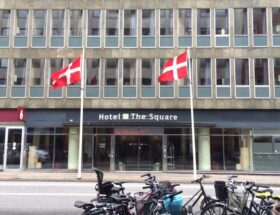 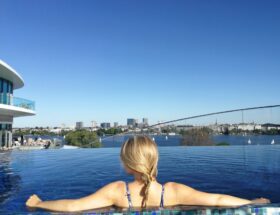