Not long ago, I had the chance to enjoy a stay at LUX 11: a collection of stylish apartments in Berlin Mitte. If you’d like to explore Berlin from the very heart of the city and still have some private life, this is an ideal location.

Berlin is one of the largest capitals in Europe, and it’s also the most dense city in terms of tourists and hotels (exceeding even Rome and London!) That’s why it’s so nice to find gems like LUX 11; apartments with everything included just a stone’s throw from Alexanderplatz. If you’re a Berlin-resident, like me, chances are you don’t intentionally go to Alexanderplatz – it’s simply too overcrowded with tourists – but a clear view to the TV Tower from you private apartment, is definitely worth opting for. Staying in this pulsating part of Berlin also grants you permission to explore close by neighborhoods such as Prenzlauer-Berg and Friedrichshain, which is obviously a must.

The history of the building is quite interesting, as it’s one of the last architectural remains from the 19th century. Originally built to house officers in the end of the 19th century, it became a hospital during World War I. It even survived World War II and was then occupied by the Russian secret service. Lastly, the KGB operated a telephone surveillance service station there to monitor conversations between East and West Berliners. The building would gain new life as the Berlin Wall was torn down in 1989 and the city’s underground art scene began to emerge. LUX 11 could finally open its doors in 2005, after two years of refurbishment, and it has rapidly become a favorite spot amongst local creatives and hipsters.

So what can you expect? Well, not an exterior screaming for attention; the facade of Lux 11 is somewhat modest, but when you enter the glass door into the cosy reception, you feel at home. There are 72 spacious apartments ranging in size from 25-55 m2. I checked in to one of the bigger ones with a fully equipped kitchenette, and even though I didn’t use it during my stay, I can definitely see the point if you’re traveling with kids (or simply want to relax in your own space after a long day out in the city). There’s also a nice café just next door serving snacks, coffee and breakfast. 24 hour reception and room service from the neighboring Asian restaurant, Prince, is also included.

Fun details: free candy in the reception and table books/magazines to read in.

LUX 11 is a good alternative to the many chain hotels surrounding the streets of Mitte. I personally like the urban designer vibe and the quirky details. While it can’t be classified as classic luxury, it’s certainly elegant and comfortable – and all the major sights are within reach.

Thanks to LUX 11 for hosting me! For more information, go to www.lux-eleven.com. 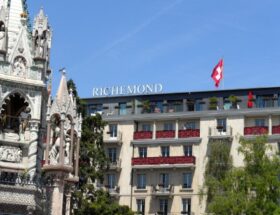 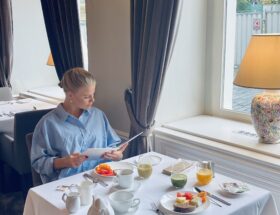