One of the most beautiful cities I’ve ever visited is St. Petersburg – also known as the cultural capital of Russia. If you plan on going here, you should consider having Radisson Sonya as your base. Located just around the corner from many the main sights, this hotel is an ode to St. Petersburg and all its cultural facets – but it still holds the standards of a regular Radisson hotel. Read my review below.

Let me put this right out there; finding your way around St. Petersburg is nearly impossible unless you know the city well. With stunning monuments, squares and buildings as far as the eye reaches, the Russian city of approximately 5,5 million inhabitants demands a good local guide, a map or a GPS to begin with. Leave the rest to your hotel, e.g. Radisson Sonya, which is conveniently located close to many attractions. It’s hard to talk about an actual city center in St. Petersburg, as the city is so big and divided by the river Neva. However, attractions such as the Marinsky Theater, the State Russian Museum and, of course, the Winter Palace, are must-see’s for any visitor.

With its 173 rooms, Radisson Sonya can’t be classified as a boutique hotel, but it looks and feels like one. The minute you enter the lobby, warm colours and carefully selected furniture embraces you – it’s a striking contrast to the often harsh weather conditions outside. The interior of the hotel is inspired by Dostoyevski’s famous novel, Crime and Punishment, so expect colourful artwork and literary motifs from the lobby throughout the hotel rooms.

The rooms are divided into three categories: Standard, Business Class and Suites. If you’re fond of big, spacious rooms, go for a suite, cause even though Standard and Business Class rooms are cosy, they’re not super spacious.

As in most other Radisson hotels, the breakfast buffet is one of the highlights of the stay (at least, in my opinion!) That was also the case here, where the buffet surprised with many local and Russian delicacies. Head to the hotel’s own restaurant, Metamorfos, for some genuine Russian food with a European twist. Even the menu here is inspired by the novel Crime and Punishment. That means an intense and colourful taste palette.

What I generally liked about Radisson Sonya, is their commitment to sustainability. The hotel is engaged with local charity groups and they have obtained the Green Key – an eco label awarded to environmentally friendly hotels all over the world. Radisson Sonya is one out of only eight hotels in Russia, who has obtained the label – so far.

For more information, go to www.radissonblu.com. 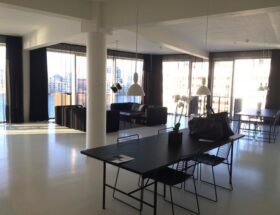 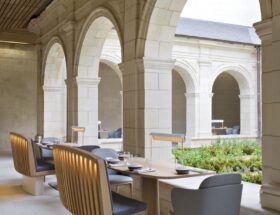